LET THERE BE LIGHT

HOME FROM THE SEA

Almost all the numbers on this 20-track tape are still in the choir repertoire. It includes two solos: Dave Rosson on Lily of the Valley which he is still doing regularly, and Bill Shimmell, singing A Roving. The Rame choir was the first one in which Bill sang outside his school. He has gone on to perform in the world’s major opera houses and is an internationally recognised star. The cover is a pen and ink drawing by village artist Roy Sullivan, a loyal choir supporter. 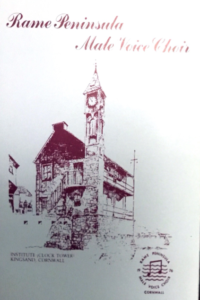 There are 17 tracks on this cassette, more than half of which we no longer perform. The choir was almost 50 strong when this was recorded. It features a solo by Denzil Arnold, three by Bill Shimmell, and a duet with Bill and Maggie Holden. The cover photo, taken in a 1979 storm by Gladys Jones, features the Institute where we then rehearsed. In the background is the village shop owned by choir member Ray Hancock 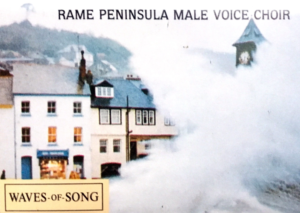 The choir, by now too big for the Institute, had moved to the Community Hall by the time they created this 17-track 25th anniversary recording in 2001. There were solos by bass Brian Pope (Stenka Razin) and Dave Rosson (reprising Lily of the Valley) and a flute solo by Royal Marine bandsman and tutor Brian Oates on Moon River. The cover photo was by Margaret Stangroom. This is the only tape of which we still have copies available. Price £6.00 inc p&p. Contact 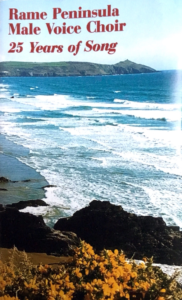 The Rame gig club pushed the boat out to support this 20-track cassette, and the choir is pictured on The Bound, outside the Cawsand Bay Hotel. This tape features two Bill Shimmell solos and two duets by Maggie Holden and her friend Sue Riley. The 31-strong choir was under the leadership of John Woodfield (front right) for this recording 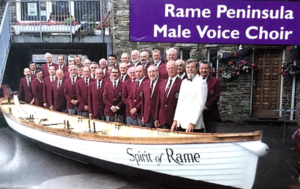