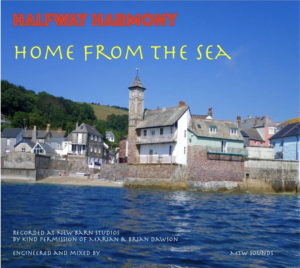 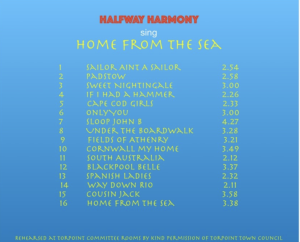 THE blast of a stiff south-easterly drives the waves crashing to the very door of the Halfway House Inn. But it does not silence the singing. For this historic hostelry, in the shadow of Kingsand’s iconic clock tower, is the refuge of Halfway Harmony.
Round its two-sided fire one can listen on winter evenings as our music keeps alive the songs and culture of Cornwall, and preserves its heritage and traditions.
The twin villages of Kingsand and Cawsand lie on Plymouth Sound at the heart of the Rame Peninsula, the Duchy’s so-called Forgotten Corner. The Halfway sits astride the boundary betwixt them. It is, indeed, our Home From The Sea.
Hence the title track of our cd. A tribute to lifeboatmen, written by Phil Coulter in memory of his drowned brother, it captures the fear of volunteers who risk their lives for others.
Most of our music tells a story, sometimes bawdy, occasionally modern, often romantic, but always from the heart. Songs of farming, fishing, mining, and smuggling, as we salute the naval heritage, and lament the lost tot.
Come hear us as we stand in a westerly blow, or round Cape Horn. Listen to the home-made percussion of The Boot with its 132 jangling bottle tops.
We are the folk, sea shanty, and 1960s rock ensemble of the award-winning Rame Peninsula Male Voice Choir, of which we are all members. They don’t all sing with us, but we could not do it without them. Nor without our accompanists: guitarist Andy Molloy and and accordionist Liz Sidebotham.
THOSE who venture into our Home from the Sea, aka Kingsand’s Halfway House, can hear us there every Wednesday evening after 9.30pm. Our supporters, bless ’em, flock there and even been known to bring food. They’re clearly concerned that we may overdo the landlord’s hospitality!
Everything on our cd has been rehearsed and adapted there over the years.
Singing is for our pleasure, and those of our loyal – and growing – band of supporters. We get requests for various songs, and always try to oblige, and that often results in a donation to one of the charities we support.
The latest was £1000 for Derriford Hospital’s Chestnut Appeal. To further this, we also perform at weddings and funerals, birthdays, and anniversaries. We can provide suitable tunes, customised exactly to your taste.
If you want to capture the music of Cornwall’s Forgotten Corner, the spirit of the Rame Peninsula, with Halfway Harmony, please contact us.